One of the most recognized traditions of the hunter riding discipline is the dress…dress that has become deeply rooted in tradition, having survived for over 200 years now.

This attire, while traditional, evolved from fashion to practicality: coats were nearly waterproof, tight fitting britches were worn to protect riders from getting tangled up in branches, and tall boots were fashioned to shelter riders’ legs from scrapes. The stock tie (traditionally fastened with a plain gold safety pin), too, was designed to double as a bandage for rider, horse or hound in case of emergency.

Have you ever wondered, though, who designed the first hunt coat? Or what the origin of the riding jacket is? Well, the short answer is no one knows for sure. But what can be said for sure is that the coats worn in the hunter discipline evolved from the jackets worn by fox hunters. And we can also be reasonably sure that the hunt coat was born in England in the late 1600’s and began to become commonly worn in the early 1700’s.

From 1750–1795, fashion in European and European-influenced countries reached a height of fantasy and ornamentation in their dress. However, a long-festering movement toward minimalism and democratization of dress under the influence of Jean-Jacques Rousseau and the American Revolution led to the triumph of British tailoring and an entirely new mode of dress following the French Revolution.

By the late 1790s, as fashion became more and more minimalistic and simplified, the traditional hunt outfit was made up of a tailored men’s coat inspired jacket, a high-necked shirt, a waistcoat, a petticoat, and a hat. Later on, the hunt jacket and waistcoat were even simplified into one (creating a false waistcoat-front), as well as a simpler riding jacket and petticoat (without waistcoat) could also be worn.

These coats could be seen in a wide range of colors. If the coat was worn primarily for riding or hunting, it was typically red, navy, or green. On the other hand, coats designed for more fashionable wear were also seen in other colors, such as blue, brown, beige, yellow and white. Fabrics were typically wool or a wool/silk blend.

So how does this translate in modern equestrian dress?

In recent years, patterns such as pinstripes, plaids or herringbone are growing in popularity, as riders strive to honor traditions, yet to stand out in the show arena. 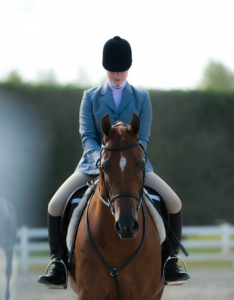 With Region 14 starting this week and Youth Nationals fast approaching, two young ladies I thought of interviewing were Isabella Perricone and her … END_OF_DOCUMENT_TOKEN_TO_BE_REPLACED

Adult amateur Kiira Harkins was destined to be apart of the Arabian horse industry, even before she was born. She likes to joke that she was … END_OF_DOCUMENT_TOKEN_TO_BE_REPLACED

It's finally the best time of the year! Horse show season is in full swing and depending on where you live, you have probably shown your horse at … END_OF_DOCUMENT_TOKEN_TO_BE_REPLACED

Youth rider Sophie Yih has been hooked on horses ever since she was five years old. It all started after attending a bunch of birthday parties for her … END_OF_DOCUMENT_TOKEN_TO_BE_REPLACED